It’s Father’s Day week. In honor and memory of my dad, I’ve been drinking out of one of his mugs. I think I gave it to him for Christmas 2004—at the end of one of the most difficult years of my life. By Christmastime I was halfway through my first year as a graduate student at UW–Madison, plenty long enough to have realized how much water was swirling above my head. I was treading furiously, but I lived every day feeling like I just might drown after all. 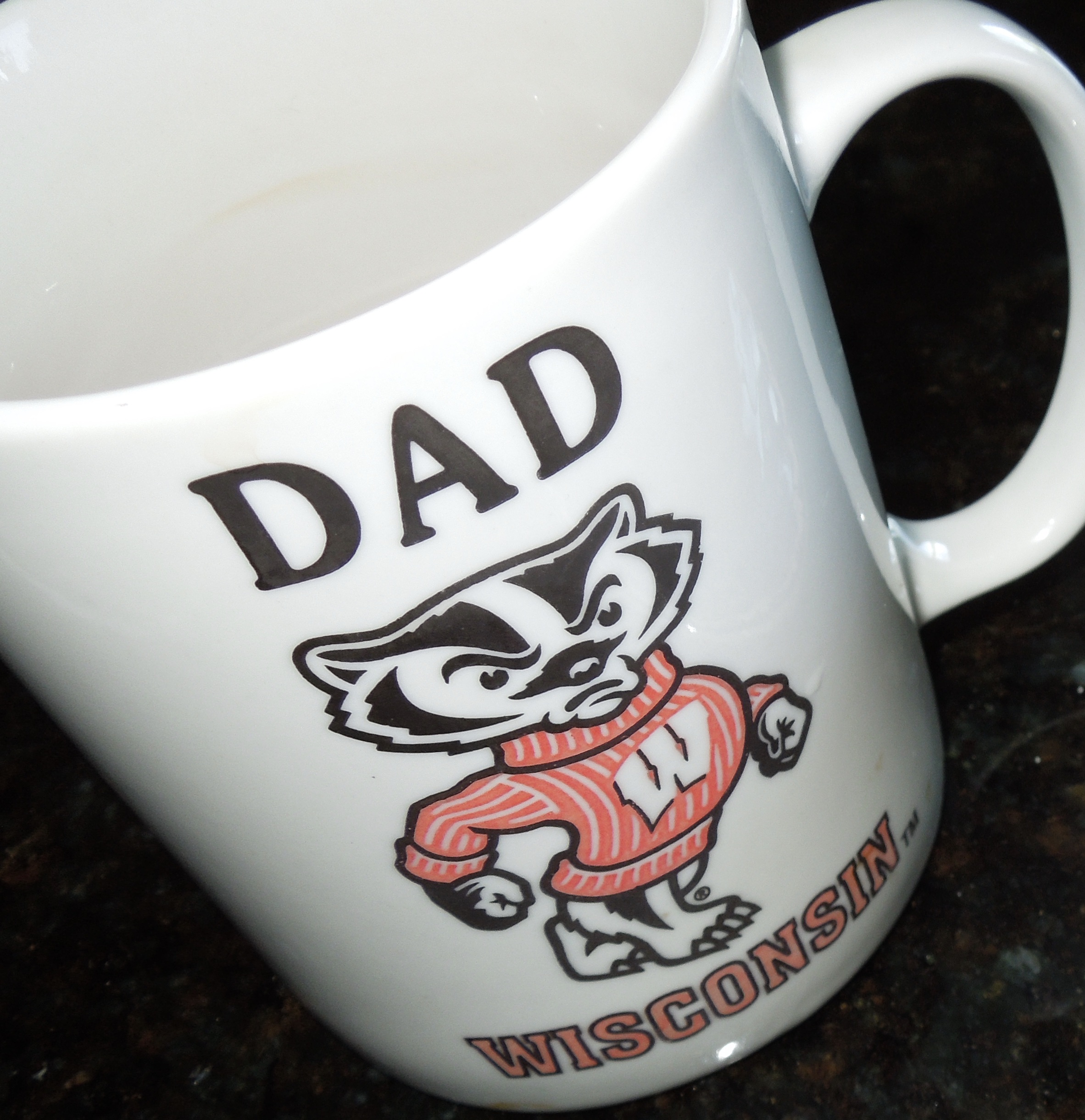 I had moved to Madison months earlier, not long after my initiation into the dark world of panic and anxiety. No doubt, what loomed ahead of me in Madison was part of the perfect storm that caused my meltdown, but regardless, there I was, facing an excruciatingly long PhD program and feeling very much broken with every stumble forward.

Sometime that fall my parents drove from Milwaukee to take me to dinner. They knew how hard things were for me—sheesh, they had driven halfway to Chicago one afternoon to get me and my car after a panic attack on the Dan Ryan sent me to a side street that somehow felt less scary than my own self—and they had been assuring me for months that they were praying for me and would do whatever they could to help. They reminded me of these things that evening in Madison, and then my dad asked, “Do you think it would help if I wrote you an email every day?” I think he somehow knew that such a gift could be a daily lifeline for me, a connection to someone who understood, someone who had faced his own demons of anxiety. Besides the daily prayers offered on my behalf, this was something he could do that I would see. Every day.

Starting the very next day, my dear dad sent me an email every day. His missives weren’t much, really—news of his day, errands they’d run, work he’d done around the house. And yet, they were everything. I knew that no matter how bad my day was, Dad was thinking of me and praying for me, and before I went to bed, I’d have an email in my inbox to remind me of that fact. Every day, with very few exceptions, my dad hunted-and-pecked out his love, hit “send,” and I gratefully received his gift in my solitary space.

His email on Tuesday, May 31, 2005, came through at 5:09 p.m., just before dinner. Other than meeting a good friend for coffee that morning, “not much else” was going on. He’d watered the lawn, gone to the dump, and taken life easy. It was a normal day.

But it was his last “normal” day.

On Wednesday, I didn’t get an email. Instead I got a phone call from my sister. Dad had had a stroke. He was okay (“okay”), but we didn’t know yet what the effects would be. I packed my bag and headed to the hospital ninety minutes away.

Dad spent that summer in a rehab facility relearning, among a host of other things, how to read and write. During that time my mom sent regular emails to me, but I’m pretty sure I cried on August 17 when my dad’s name appeared in my inbox again.

Im glad to hear that you passed your exam. Another step up the mountain.

From that point on, my dad’s emails served a dual purpose: they were a lifeline for me and they were writing practice for him. From August 2005 until September 2016, he emailed me every day, with a few more exceptions and a little bit of help from my mom. His notes became shorter over the years—sometimes barely more than his greeting, followed by “love, Dad.” I knew it was a painstaking exercise for him to write every day.

When I got married in 2016, my parents didn’t “give me away” in the traditional wedding sense. I had been on my own for decades by that time, so it hardly seemed the appropriate ritual. Instead, my dad walked me down the aisle, pronounced (shouted, really) his blessing on the marriage, and took his seat next to my mom. A week or so after the wedding, he asked me if I still wanted him to send me an email every day. I told him I really enjoyed hearing from him every day (and I knew it was good exercise for him), and I’d love for him to keep writing to me.

But my dad was so very tired by then. He had taken such good care of me for so long, but he was more than ready to leave the day-in-day-out loving care to Rick. So that fall, in his own way, my dad gave me away. His emails dwindled until they finally stopped. The last note I received from him was on September 24, 2018. One of his home health care workers helped him write it:

hi how are you? we went to a funeral, people from church. it was nice to see mark. he will be sad. how is y0ur new book? I miss you. I Love you.

I’m doing well. I went to a funeral a while back, too, and I’m still sad about it. My new book is with the editor—I hope to get feedback any day. I miss you, too. I love you.